The traditional end of season rally is Castle Point transport museum's Canvey Island rally, and it's the one I look forward to most as I can run in service on the shuttle service between the display site and the museum as many times as I like.

This year was so wet that the field where the display buses are usually parked was deemed out of bounds. Luckily numbers were down due to the weather and so thankfully is was possible to park everything on the hard standing car park area, all be it with some challenging imagination required photographers in order to get their prized shots.

I took 317 and we did indeed run in service. I lost count but I think we did six round trips. Due to the lack of visiting vehicles and thus those taking part in the shuttle service, pretty much every trip we did was a full load - in fact we twice had standing loads!!


This image was added to the image sharing site flickr by 'parkandride2007', who retains copyright ownership of this image, and shows just how wet the day was!!: 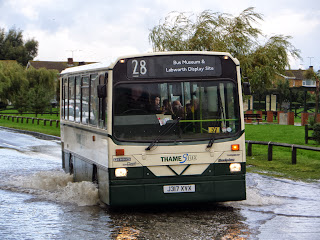 Posted by Colin Thorne at 17:17 No comments:

Following the latest breakdown with 335 - will it ever behave itself?!! - and some discussion with the person who bought Dart J317XVX off me.....

I'm pleased to say that I have re-acquired 317.

Having thought long and hard about it, fully weighing up the reasons why I sold the Dart and whether I can realistically keep 3 on the road......how this season has proved that an on-the-road back up vehicle is a must to guarantee attendance at all planned events.......well on balance I decided to take up my option of first refusal should the Dart owner wish to move it on.

As a result, and given that 335 remains out of action, I will be taking 317 to the Canvey rally on 13th October.
Posted by Colin Thorne at 05:57 No comments:

If you understand the meaning of the three letter title, sorry for the language!!

335 was booked to take part in the Theydon Bois running day as part of the North London transport society's autumn transport bazaar event.

We got 20 minutes down the road from where she's stored and I got a warning light light on the dash informing me of low engine coolant level. Now I had checked the coolant level prior to departure (I check all fluids as a matter of routine) but I duly pulled over and rechecked it - it was still full.

Being as the temperature gauge was indicating that we were in danger of over heating I made the decision to turn round and return to storage. Upon arrival and having sought advice, I confirmed what I suspected - we have air trapped in the coolant system. To top the day off, the radiator sprang a leak about two hours after being parked up.

Looks like the season is over despite the last event still being a week away - Canvey Island on the 13th....
Posted by Colin Thorne at 14:25 No comments: