I often say that Canvey is my favourite rally but actually, I think its Clacton.....

I arrived at the Factory Outlet rally site at about 10am...........and the next time I paid real close attention to the time, it was just about 5pm! I only just managed to photograph all the buses and just about had time to chat to fellow preserved owners that I know (plus a bit of last minute pinning people down ahead of my own rally at Basildon). I have no idea where the day went!

Well I do a little bit - I offered myself and DAF P337ROO for service and we were allocated a duty with four trips spread evenly throughout the day - 2 trips on the town centre 114 service, a 119 journey via Weeley & Thorpe le Soken and then another trip on the 114.

Things didn't quite go to plan in more ways than one though. Firstly there was a diversion on the 114 route due to a road closure; I was a little concerned as I don't know Clacton all that well - I even warned my passengers that we may get lost - but I needn't have worried as the diversionary route was quite simple and was actually well signposted as it was a planned closure/diversion.

Then on route 119 there was road works at Thorpe le Soken which cost about 6 minutes in queueing time.......of course there wasn't a workman in sight. I normally stick to the 114 route as that's all I know but I thought I'd be bold this year and go for the 119 as it looked simple enough when I looked at a map.........as it turned out its quite a fast route (ie, some of the roads have high speed limits) so it gave an oppourtunity to stretch 337's legs and show off her 56mph capability.

I had expected the final 114 trip to be a routine affair as I'd already done the diversionary route twice but the bus service controller asked me to switch to the 112 Seafront Circular to cover a gap.........errrrmmmm.......I didn't have a clue where this route ran but luckily a former Harris Bus driver that know's Clacton well was on board, so I offered him the oppourtunity to have a drive and thus I now know where the 112 goes. I think I'm gonna enjoy next year even more now that I know a few routes!

Here's 337 at Clacton's Pier Avenue on the first 114 journey - the electronic blind was displaying the Factory Outlet destination but my camera failed to pick it up: 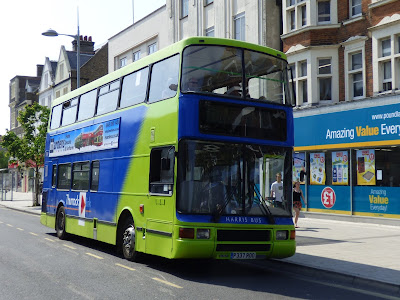 Posted by Colin Thorne at 16:12 No comments: