In a bit of a last minute arrangement with an adjacent local preservation group, I got myself involved in helping to provide the free bus service associated with the Mersea Island Lions Transport Show.

Initially I took Dennis Dart J317XVX but it became apparent that not only was a double decker required, the other group (who were in overall charge of the free bus service operation) had also planned on me taking a double decker. Luckily the new storage location isn't too far away so a swap of vehicles with DAF P337ROO soon had the issue resolved.

In the image above P337ROO can be seen at West Mersa, MICA centre, along with a supporting open topper.

Ah! My fleet has a new addition!

I had been watching this vehicle along with two sisters for around three years. GHA went into administration in July and the administrators decided to sell off some of the owned vehicles via an auction; I was thus lucky enough to put in a winning bid.

Here she is having just arrived at her new home back in Essex: 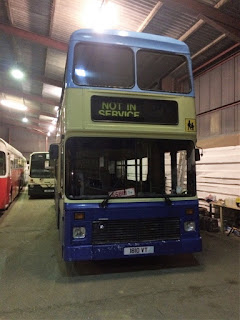 Posted by Colin Thorne at 15:42 No comments: