I took 302 to Bus & Coach Preservation Magazine's bus rally at Newbury showground in Berkshire - its events this far afield from Essex that prompted me to look at acquiring a vehicle that would be up to the job of long trips.....

I'm extremely pleased to report that 302 performed exceptionally well. Given that it was one of the hottest days of the year and that we encountered several bouts of stationary traffic on the M25 on the way home, a tyre blowout due to the high road surface temperature (a section of the M25 was actually closed due to road surface damage caused by the extreme heat!!) or overheating engine could have been a real possibility. 302 seemed to be very comfortable and soaked up the miles with effortless ease. 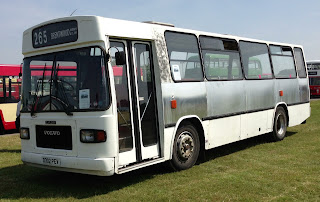 The event itself was a bit of disappointment though; given that it had been organised by Bus & Coach Preservation Magazine and that their advert suggested 250 buses could be catered for on site, well I thought the 50 or so buses that showed up was a bit of a poor showing for such an event. The "enthusiasts market" didn't really excite either to be honest.

Will I go again next year? To be honest, probably not.

Next up is the Colne Valley bus rally - will 335 be able to make the 1 mile journey without breaking down?.....
Posted by Colin Thorne at 11:11 No comments:

335 made it to North Weald bus rally, its first one under my ownership and in its restored original livery (dots excepted!) but only just.....

Just as we came off the M11 to join the A414 for the short drive to the airfield, the power steering failed.

Given that it will need to be raised in the air to fix the problem pipe, and of course that wasn't practical on the airfield/rally site, the decision was taken to make use of the breakdown cover that I thankfully have in place and get 335 towed back home where the mechanics next door can tackle the latest issue. I'm sure they'll be as glad as I will be one day to see 335 go out on a trip and come back again without actually breaking down - it really has broken down every single time I've taken it out on the road!! 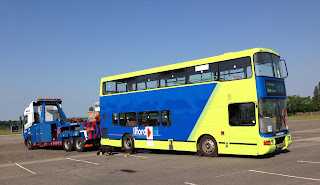 As you can see in the image, she was towed backwards - the reason for doing it this way is that it saves having to remove the half shafts from the the double reduction hubs or disconnecting the prop - this can only be done if the towing lorry has a long enough boom though!

I was already intending to take 302 to the Newbury bus rally on 14th July, though I was gonna consider the possiblity of taking 335 if it behaved for North Weald - this latest incident has definitely made my mind up!!

Posted by Colin Thorne at 09:36 No comments:

It is the eve of the North Weald rally and I have a choice of two buses to take!

335 is also up and running again after a new compressor pipe (different part to the one that was replaced at the MOT station) finally allowed the air to build up thus releasing the safety brake. Of course being 335, you fix one issue and another appears - this time failed gaskets between the compressor and water system meant the compressor was filling the water system with air pushing water out through the header tank. The air dryer pack and filter also needed changing - something we already knew from the MOT shenanigans - and this allowed the air system to "unload" once enough air has built up. 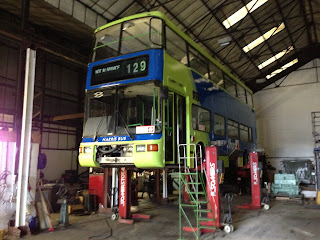