Its been a very busy weekend for me as I was involved in the running of Yeldham Transport Museum's open day.

The open day itself was very successful with good weather and just over 500 visitors. All of the free bus services were well used, with buses often carrying full loads. I operated 317 on two Braintree station trips, 2 Mystery tour trips and a single short hop into the neighbours at Colne Valley railway.

Notice that I used 317 at Yeldham's open day rather than the planned 335? Well the reason is that 335 continues to misbehave - the latest episode being quite spectacular.

We were part way through the MOT test last Friday morning when the air supply suddenly failed meaning the handbrake couldn't be released. A broken pipe from the compressor was quickly diagnosed however it took 7 hours to rectify the problem mainly owing to the fact that the rear wheels were still on the rolling road part of the MOT bay. The difficulty was that the pipe that needed to be accessed is located behind the nearside rear wheel - with the rear wheels sitting on the rollers, clearance was pretty much  non existent. The solution was to await the arrival of the test station's tow truck (out on a job) and either lift the back end of 335 up with its towing boom or provide low level jacks to jack up 335. 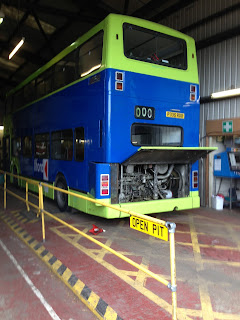 When the tow truck arrived it was established that one of the hydraulic pipes on the boom had started leaking on its last job and so the only remaining option was to manually jack up 335. Once jacked up, the brakes were wound off and 335 was moved forward fully over the pit where the offending pipe could be accessed and replaced. Once the pipe was replaced it took a further 40 minutes to get the air to build up enough to get the handbrake to release.

Following further issues with the air failing to build up properly on the way back home from the MOT station, 335 is now once again failing to build up enough air to release the handbrake thus it wouldn't physically move on Yeldham's open day and thus why the "old faithful" 317 was used instead. Having done some investigative work and ruled out compressor failure (ie, 335 is producing air), the suspected issue is either a failed "air dryer pack", a failed "4 way protection valve" or possibly a failed air filter. I'm reliably informed that the air dryer pack is almost certainly the item at fault.

Given that my finances have taken a battering with 335's surprise equipment failures, and that even if the latest issue is resolved in time, I cannot trust 335 to behave for the next event which is the Clacton rally on 2nd June. As 302 is currently stripped down and awaiting body repairs, I will once again be taking "the old faithful" 317 to Clacton......
Posted by Colin Thorne at 16:48 No comments:

Well it was planned to move 335 (the double decker) into the workshop so that she could be lifted up in the air to have her new throttle cable installed, but she's clearly happy where she is as the footbrake valve has now failed meaning she can't build up enough air to release the brakes.

I wonder how many new parts will need to be fitted before we end up with a working bus?!!!

It is still planned to have her fixed and MOT'd in time for the next event (Yeldham Transport Museum open day, 19th May).........
Posted by Colin Thorne at 14:46 No comments:

In the end I took the old faithful, 317, to the Spring Gathering.

Reasons were various but mainly due to the state of 302's bodywork. As can be seen below, it is as bad as I suspected in the area between the first passenger window and wheel arch. As we go further back things improve dramatically, though the top box section does need replacing under the 2nd and 3rd windows. 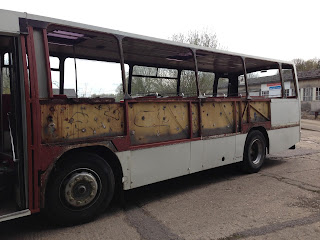 I wasn't intending to make a start on 302 just yet, but much like when you have a piece of wall paper starting to peel off.........you start picking at it and before long its all stripped off.....

As things currently stand this does mean I'm down to having just 317 on the road - work is progressing on 335 though and it is expected to be on the road in time for the next event, the Yeldham Transport Museum open day (19th May 2013).
Posted by Colin Thorne at 16:47 No comments: