Well in terms of vistors and buses, it was a slight improvement on last year though this event is still struggling to shake its poor reputation.

For my part, I took something a little different this time around.

Although both Dart 317 and DAF 337 are available (302 has no MOT), I fancied a change; in any case we have two "low floor" Darts at Yeldham (my storage location) that were donated by First Essex for preservation and I felt it was time to get one of them to an event in Essex.

So I offered to take one and was given R721DJN, a Plaxton Pointer 2 bodied motor that's spent its entire 17 year service life at Hadleigh (Essex) depot.


Here we are parked up at North Weald: 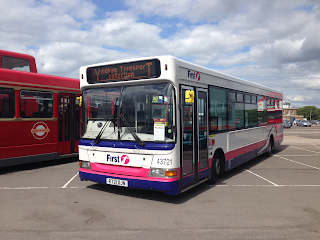 Posted by Colin Thorne at 15:47 No comments:

It was the Clacton bus rally yesterday and visiting buses/people were not put off despite the weather being cloudy all day with rain in the afternoon. Some 60 buses were in attendance and the crowds were consistently good all day. It was very pleasing to see the trend of poor support at events turned around........I sincerely hope we see a repeat at my next planned event, North Weald on 21st June as that event really has suffered in recent years.

It was particularly surprising how busy the two open toppers were given the poor weather!

For my part I took DAF P337ROO - its likely to be my main vehicle this season with Dart J317XVX acting as back up (Volvo not currently MOT'd and having a rest after much use last year).

Somehow or other myself & the DAF ended up as the lead vehicle for the convoy run from Great Yeldham to Clacton. The journey went well with no issues at all - I'm very happy with 337's reliability now so expected a trouble free day anyway.

I was booked to operate two runs on the town centre service and the fisrt was almost a full 70 seat load!! Good job I took a decker!! The second run was much later in the day and so was expectedly quieter. I didn't drive for this run; much like last year at Clacton, a couple of other owners had a go as they were curious as to how the DAF drove (and its always a pleasant change to be a passenger on your own motor from time to time). Both drivers were very complimentary about 337........quite right too as she is a lovely drive!!

Here's a couple of images of the service runs - the first image is onsite at the rally and the second is in Clacton town centre..... 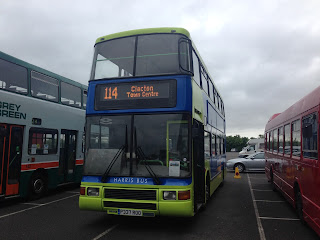 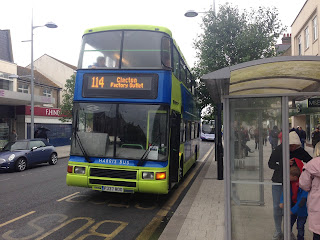 For the return journey back home, I was again elected to take the lead for our convoy - a chance presented itself in one of the villages at a set of traffic lights for some roadworks.........there's actually 7 buses in this image!! 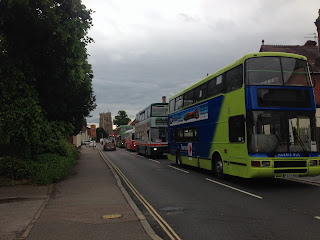 Posted by Colin Thorne at 18:03 No comments: