Having come to the conclusion that I'm getting nowhere fast with Olympian W437CWX, and given that its storage location at Yeldham is about to be redeveloped into a housing estate, I've decided that the best thing for the vehicle is to find a new preservationist owner.

To get a base value for the vehicle I got a quote from a scrap yard and then advertised the vehicle within select preservation circles. Only one serious person stepped forward and the vehicle is now destined to make its way North to Yorkshire to hopefully be restored to its former glory. The buyer wishes to remain anonymous so that's as much as I can say at the moment.
Posted by Colin Thorne at 19:26 No comments: 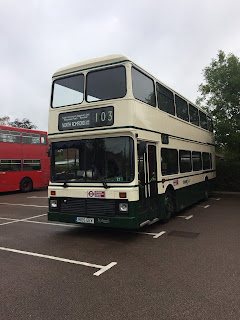 Having gotten my new Olympian (H105GEV) painted in time, I was invited to take it to the transport sale held at Theydon Bois village hall.

The arrangement is that a small number of buses are displayed in the car park and they offer free rides around the local area as an added attraction alongside the transport sale.

H105GEV completed two trips, the first to Waltham Abbey and the second a loop via Debden and Abridge.

The image on the right shows H105GEV on display in the car park at Theydon Bois Village hall.


The day after the Theydon Bois event was Canvey bus rally. This is one of my favourite events as I get to run in service as much as I like. As the Olympian was now ready to rally this was the chosen weapon and as such I thought it would be nice to have my Dart (J317XVX) there too as they're a matching pair. I had a second driver available so all was looking good.....

Unfourtunately the Dart had other ideas and developed an alternator fault which has to led to the alternator being removed for repair. Whilst unbolting the alternator I noticed that the header tank has a slight split in it and so this also needs to be replaced.

As the Dart was unavailable I offered my second driver the oppourtunity to take DAF P337ROO instead which was accepted. Both buses completed a number of trips - possibly 5 each but we lost count! I gather the DAF carried healthy loads on all trips - I had the Olympian and this proved particularly popular with full loads on trips operated, though the last journey was a tad lighter owing to an open topper coming out to play.

Here's the Olympian on the shuttle service at the bus museum and both vehicles on display at the rally (yes, the parking was that tight unfourtunately). 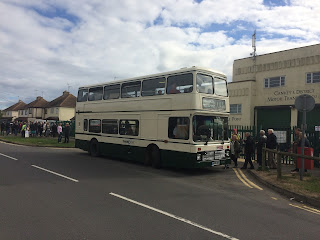 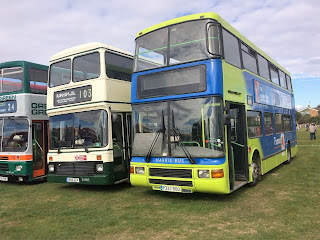 Posted by Colin Thorne at 16:37 No comments: