Sunday 26th June 2016 was the date of my own first ever bus rally, held at Barleylands Farm Park near Basildon.

Unfourtunately mother nature did its utmost to try and destroy the event with so much rainfall in the weeks prior to the big day that the rally field was rendered unusable. Although not ideal, I did at least have a smaller hardstanding area available as back up plan and this was utilised in order to save the rally from cancelation.

Despite having to resort to using smaller area, and thus being forced to alienate the sales stalls, feedback was so positive that I've decided to have another go in 2017.

Moving on to West Ham........the bus garage rather than the football team....

The Londoner Live show took place at West Ham bus garage on Saturday 23rd July. The basic concept was to assemble buses of various types, old & new, in order to show how London's buses have changed over the years. Initially I was invited to take my Dart J317XVX to represent the use of the type for the 90's fashion of running improved frequencies with smaller vehicles.......and of course the involvement of non red bus companies through the tendering process.

Following further discussion with the event organiser, it was also agreed that DAF P337ROO would be added to the line up representing Harris Buses doomed time in tendered London. Granted 337 isn't in the same condition as new (ie, no centre exit doors, electronic destination blind and Thurrock link branding) but the event organiser agreed that the base Green & Blue Harris Bus livery was enough justification for inclusion. 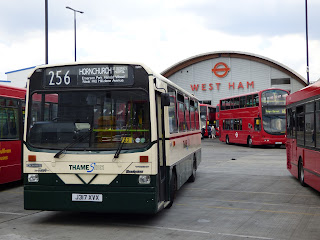 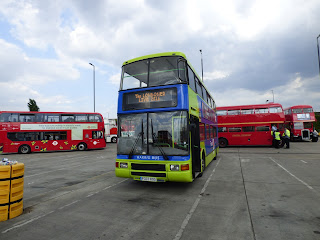 Posted by Colin Thorne at 18:21 No comments: